I have always wanted to pose nude for art. Maybe because I am a nude photography enthusiast or because there is something open and fearless and self-accepting about letting the camera capture all your insecurities. For me it was my boobs.
A friend once asked me “If you could go under the knife to change something about your body, what it would be?” And I told him: my boobs. Not the size but the shape of them. The surgery I had altered them and sometimes they take on this weird shape I hated for the longest time. I hated them so much I would pinch them so they could shrink back and take the shape of normal boobs. But after years of them never really changing, I accepted it as they were- an oddity-but as MY oddity.
And after that I wanted to take a photo of them and also of the scar I still have under my left boob- the scar I will never have removed because it reminds me of places I‘ve been and how far I have come.
So about two weeks ago, the chance to take one such nude I came up and I took it wholeheartedly. A photographer friend of a friend was undertaking a nude series of pics and he needed volunteers. I signed up for it and Sunday we met up in town with the photographer whose name is Brian. He brought along an artist to whom I would be a canvas. And I loved the sound of that!
That was until we went to the shooting location and the actual undressing had to happen. Ramsey, the artist had discussed what he meant to paint with the photographer and I, and when he hesitantly explained that my butt will be part of the picture, I held back a little. I had relaxed when he’d said my back will be the canvas- and I won’t have to show my boobs. But my butt…I have stretch marks there man!
But I hate wasted energy and because I had come so far already, I wasn’t about to chicken out.
Later, I am extremely nervous as in undress in the privacy of our host’s bedroom, and as I sit there in my undies counting 1-10 and working up the gut to let this stranger see my bare ass, I breath in and take them off without thinking twice. I am a canvas- I tell myself over and over again. I am a canvas.
So I cover my front side with my sweater as the artist sits beside me and chooses his paints- explaining to me why he’s choosing particular colors and not others. And at last when I have to stand in front of him for the painting to begin, I do so like a stiff wall. I think he senses my nervousness and calls me out on it. I laugh and admit that I am indeed extremely nervous.
And he laughs too and says he will paint as fast as possible. But I tell him not to. I know I will get over my nervousness with time but I would never forgive myself if a piece of art didn’t come out as it should simply because I couldn’t stand naked in a nude photoshoot I signed up for!
So I look at the wall as he begins painting the outlines. I know this because he tells me everything he is doing every step of the way and even though I truly don’t need all the freaking details I know he’s setting me at ease which I am eternally grateful for.
And we speak of annoying Kenyan art such as Maasais in the sunset and African children drinking from gourds in backdrops that make no sense; and I get an idea of what kind of art he does and why he does it. I also learn he has artist acquaintances that sometimes need models to pose for them and he asks if I would be up for that. And I say of course I would; because I am always looking to shed my inhibitions- and he spoke of being paid per hour too so, win-win right? 😉
Anyway when he is almost done with the painting, the photographer asks if he can come in to see- and I’m like, why not. The host comes later as well and they are both in awe as they talk about whatever is drawn on my back- and what a relief it was to not feel one bit as though they were checking out my ass- or looking at me like perverts but like a piece of art!
So later we start taking the photos and while at first I was still not comfortable showing my nude front, in the course of changing postures, I had to at some point. With time I let go of my inhibitions mostly because these guys were so easy, never once made pervy jokes and they did everything to make me feel comfortable.
They viewed me first as a canvas and I lost myself to being that. 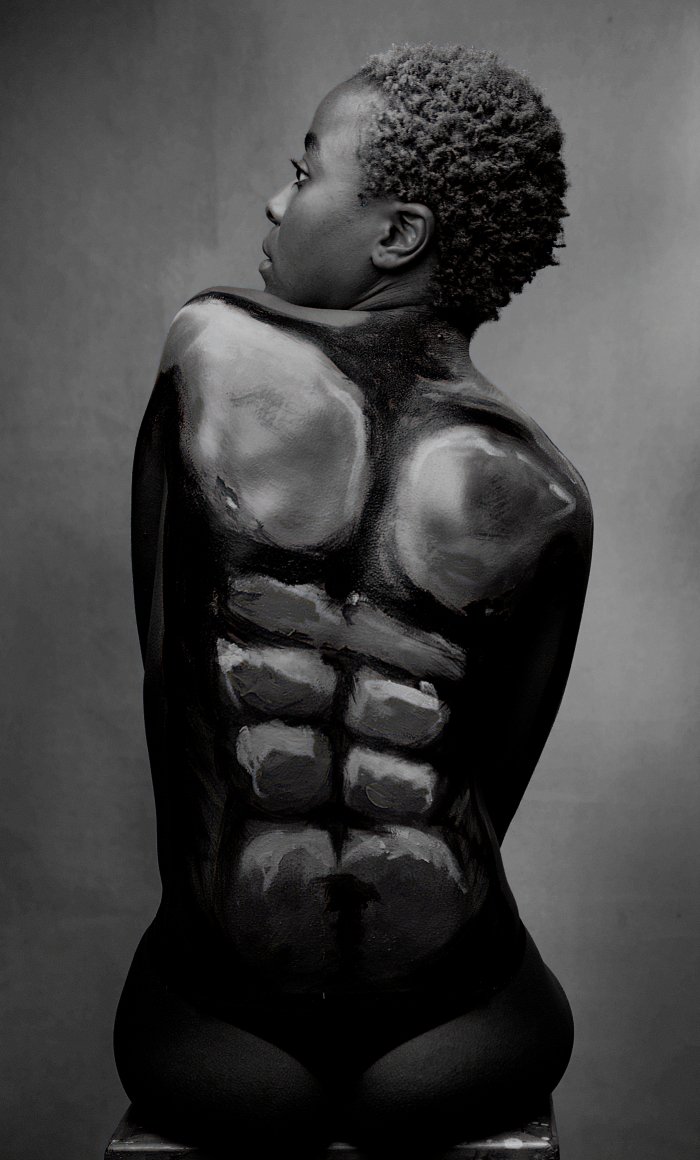 Behind every successful man is a woman- and vice-versa

Afterwards, feeling lightheaded from exhilaration and heading home, Brian and I are talking and he tells me about the morality police who begun quoting bible verses after his first nude photoshoot- and of his mother who saw his artwork and actually liked it. I doubt any of my family would be that liberal but I never expected them to be anyway.
In the end, I guess what matters is what you think of your art. Does it reflect the person you truly are? Does it challenge you in ways that free you or does it insult any part of you? Because no one should pose nude while feeling exploited- that is a really bad place to be.
I plan to take part in another photoshoot of this kind also to better feel what my actors will feel when I tell them they have to be naked in front of the camera. Because I plan to write such stories and I am not about to mindlessly tell someone to stop being a baby and just undress. It takes a lot of courage to be naked in front of anyone or anything.
Like the artist said, to use the nude form is to create the most open, most vulnerable, most honest art there is.

And honest art is quite something.